The Fracture Control Program is one of the oldest university-industry research and education programs in the world.

For more than 40 years, with two courses a year covering basic and advanced topics in fatigue and fracture, the Fracture Control Program has educated thousands of engineers and designers from industry, government and academia.

(All times are CDT.)

The Need for the Program

Despite advances in computer technology and materials developments in the last three decades, component and structural failures still occur today. Many new software packages have been available to evaluate variety of crack mechanics and fatigue problems. The end users and non-experts are often not as familiar with the assumptions made in these new tools. For example, the Goodman diagram which was introduced in the 19th century is still widely used in the fatigue software. Its limitations to high mean tensile stresses or to compressive stress regimes have not been fully recognized. Similar examples can be found in the fatigue crack growth prediction software commonly available today. A crucial step is to input the role of crack closure as a function of loading conditions and geometry. Certain assumptions are made in these closure models that could result in nonconservative predictions. 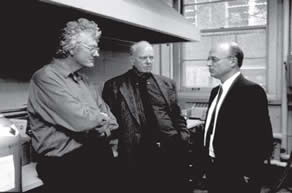 The Fracture Control Program made several major contributions to fatigue and fracture analysis that are common in industry today. Based on FCP supported research, the local strain approach to fatigue became the basis for life prediction of notched members. The local strain approach visualizes the material element at the notch root as a smooth specimen and uses the laboratory specimen data and Neuber analysis for prediction of notch fatigue life. In the early 1970s, the FCP researchers introduced simple-cycle counting algorithms to handle variable amplitude fatigue loading. The ‘rain flow counting’ algorithm, which predicts closed hysteresis loops, was implemented using linear and nonlinear damage rules; fatigue lives were successfully estimated. Also, extensive research on fracture toughness of steels was conducted and criteria such as ‘leak before break’ were further developed. This criterion uses the toughness to yield strength ratio as a parameter to decide whether ductile fracture (yielding prior to fracture) occurs as opposed to catastrophic (brittle) fracture.

More recent achievements include the critical plane approach which was further developed for multiaxial fatigue. This approach considers the shear and normal stress components on the crack plane as a driving force of fatigue damage. Stress-strain modeling under complex nonproportional loading has been developed. The Fracture Control Program developed crack closureâbased fatigue crack growth models for short and long cracks explaining the effects of stress state and geometry on crack closure. The models successfully predicted the crack growth from notches, R-ratio, and stress level effects. Some of the closure concepts were applied to analytical studies of the influence of weldment size and welding geometry on fatigue. Effects of mean stresses, ultimate strength of the base metal, severity of the controlling stress concentration (weldment category), and type of loading have been considered. The FCP made contributions in the development of a computer-based weldment fatigue design methodology.

The Fracture Control Program is continuing to develop methods to predict component behavior under fatigue loading conditions. Professor Darrell Socie and Dr. Peter Kurath have played an active role in the SAEâs ATV program with a testing and simulation research program. Professor Socie has been active in studying frequency based fatigue analysis and probabilistic methods in fatigue. He has written a textbook on multiaxial fatigue with Gary Marquius, a former graduate student supported by the program. Â Professor Sehitoglu has studied the thermo-mechanical fatigue behavior of aluminum alloys that are considered for cylinder head and engine block applications. Sehitoglu edited two ASTM symposia in the area of thermo-mechanical fatigue.

This web site contains a useful set of web-based fatigue analysis software tools for computing fatigue lives of metallic machine components and structures. It is intended to be a single source containing all of the information needed for an accurate fatigue life or durability assessment. Fatigue is the decreased capacity to function because of prolonged exertion. Simply stated, sooner or later all materials will fail when they are cyclically loaded. The physics of fatigue is complex and dependent on many factors. As a result, several methods have been developed and are used to assess the fatigue resistance of components and structures. No single method is best for all situations so several methods have been included here: stress life, strain life, fracture mechanics crack growth and welds. Guidance is provided as to when, why and how the various techniques should be used. If you are not already, we suggest that you become familiar with constant amplitude fatigue analysis before using the other types of analysis.

Benefits of the program to industry

Each sponsor receives a number of benefits from participation in the Fracture Control Program, including the following.

The Industrial Advisory Board cooperates with university staff in identifying problems of practical importance, ensuring that the research is directed toward industrial needs. The 2015-2016Â FCP Industry Advisory Board members are:

Over the past 40 years the following companies have participated in the Fracture Control Program. Five to six companies have been active at any one time.

In addition to the seed funds provided by the Fracture Control Program, the principal investigators have research projects with participating companies. The total research dollars, including program and other funds, exceed $600,000 a year.